A 25-year-old lady, Grace Amezando, has had one of her ears totally burnt and her face disfigured after her displeased boyfriend she cohabited within a kiosk at Ashongman Estates attacked her with an acidic substance.
Other parts of her body, her hands and chest have also been deformed making it difficult to stretch her hands.

According to the mother of two, her boyfriend, Bright Bosso, prior to the attack, alleged she was cheating on him and threatened to make her look like an old woman.

“We had a misunderstanding on the 11th of May and he said I thought I was beautiful and that is why men are chasing me so I should wait and see. I would look unattractive very soon,” she told crimecheckghana.

She said three days after her lover threatened her, at around 2:00 am while she was asleep in their kiosk with their children, she felt a hot substance on her body, which started causing her burning sensations. The substance, which she believed, was acid also splashed on her little children who were with her at the time causing them some injuries.

The young lady indicated that she suspected her children’s daddy was behind the attack because when the incident happened, the disappointed boyfriend told a neighbour who had called him to inform him about the happening that he was at Kasoa “but within a short period of time he appeared in the house drenched in sweat and the neighbours who were around to help looked at him with shock.”

A friend of the lady, who contacted Crime Check Foundation (CCF) for support, Lawrencia Agbozo, said the suspect, who has so far been remanded, feared losing her to another man and therefore attacked her to look unattractive.

Madam Agbozo said while she struggled to get proper medical care, the man rented out their kiosk and topped up the money to hire the services of a lawyer to defend his case.

“Grace was taken to the Atomic Hospital and also the 37 Military Hospital where they said they couldn’t handle her situation. She was later referred to the Korle-Bu Teaching Hospital where doctors recommended immediate surgery for her but we couldn’t afford the cost,” she said.

The concerned friend further stated that “Bright has been arrested and has been remanded by the Kwabenya Circuit Court but the processes to prosecute him are being delayed.” 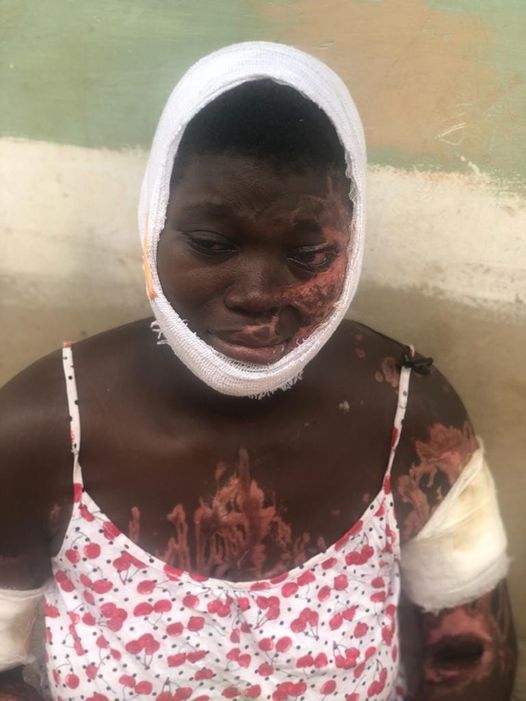 Allow Us, We Are Tired Of Expired Manhood Of Ghanaian Men – Naomi Gold Fires Sam George Over LGBTQI+ [Video]

2021 World Happiness ranking Reveals Ghanaians are among The Most happiest People in the...

What have African gods done for us after all the schnapps and goats –...

Following a successful fourth and fifth season, TV3 is gearing up for Season six of its popular reality show Date Rush, in which single...

A video making waves on social media shows the moment a pregnant woman threatening to abort her unborn baby after her boyfriend failed to...

Funny Face, a Ghanaian comedian and actor, has threatened to murder his baby mama Ama Vanessa for allegedly torturing his life. In a new outburst,...

Life Is Still Not Easy In The Economy But Better Than Under Mahama –...

Ghana's President Nana Addo Dankwa Akufo-Addo is optimistic about the country's economic recovery following the COVID-19 outbreak. "I accept that life is still not as...

Lady visits her hometown gods after donating kidney to boyfriend only...