Several residents pulled out from Sentie, Sakalu and other adjoining communities in the Sissala East Municipality have begun constructing their deplorable roads and would not wait for the government any longer.

The residents were spotted with stones, leaves, and other materials trying to make the road motorable as a means of transporting fertilizer, chemicals, and other agricultural inputs to their farms.

According to them, since independence the Sissala area has not seen a major road construction, considering the devastating roads linking Tumu to Gwollu, Wallembelle, Jeffisi, Lumbussie, Banu among others.

They explain that their already bad roads are left each year by successive governments to further aggravate by heavy rains that have always plunged the area thereby making their roads unmotorable. 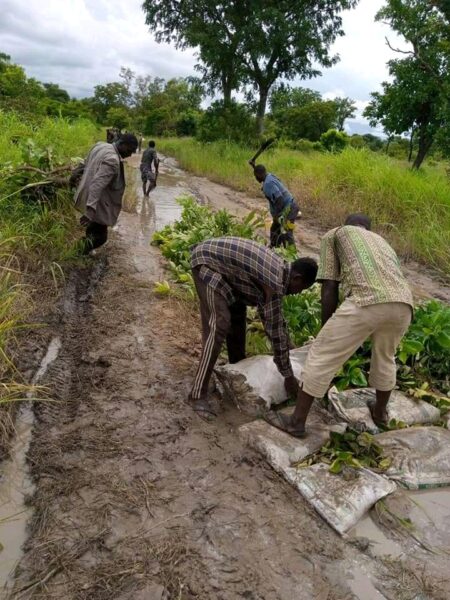 They further expressed that available data obtained from the Regional Department of Agriculture shows clearly that the Sissala areas are the leading producers of maize and other staple foods in the Upper West Region and by Extension Ghana at large.

However, the area has no good roads linking farming communities to various market centers.

Dunga Sam, a resident of the area recounted that farmers had to suffer each year when transporting farm produce thereby causing post-harvest losses as a result of their poor roads.

“We came out in our numbers to work on the Sentie to Sakalu road, which has worsened entirely over the period due to weeks of heavy downpour, we have to do this work to help ourselves because the help we so anticipated from the government doesn’t really come,” he said. 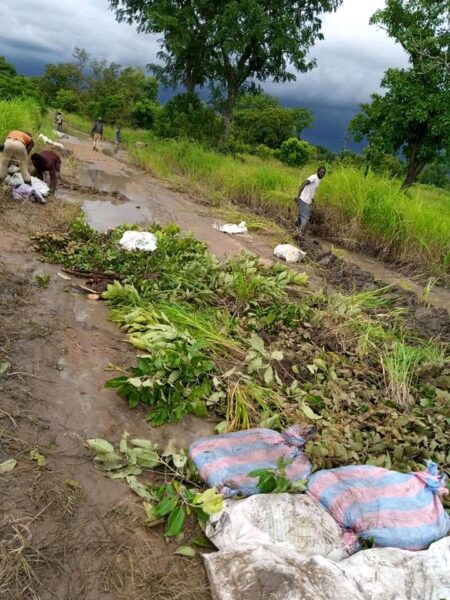 On the 25th of May 2021 dozens of Sissala people from four (4) districts of the Upper West Region poured onto the various streets of Tumu to protest against what they described as government negligence.

They explained that governments and development partners have over the years neglected the deplorable and almost non-existent farm access road network in the four high-producing agriculture districts.

This occurred at the back of a government’s roads project which did not capture a single road in any of the four (4) Sissala districts.

Ghana received a grant of EUR €35 million from the European Union for the rehabilitation and maintenance of 670 km feeder and farm access roads in the Upper West Region.

The financial support is aimed at improving inter-connectivity between areas of production and marketplaces.

The Residents are therefore calling on the government to as a matter of urgency fast-track the EU-funded roads project to fix their bad roads.

They believe that such a step will aid them to smoothly transport their farm produce to the various markets after harvest.

Caterers Of School Feeding Program To Embark On  Strike

Almost everything Nana Addo was against in opposition happening under his Government – Sulley...

VIDEO: Ghanaians vote Mahama out of poverty, they will do same if you disobey...

PHOTOS: Cheating Man gets stuck while making love with another woman...

Ghana is not heaven today but better than before – NPP...