Home Politics Life is worse under Akufo-Addo – Saddick Adams cries over hardship in...

Saddick Adams popularly known as Sports Obama has taken on the current government for bringing hardship to the economy.

The Angel Fm sports broadcaster talked about the rise in cost of living, frequent power outages and shortage of water in some places. 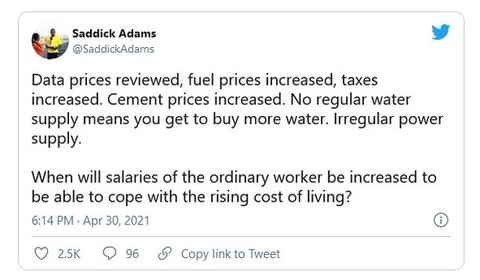 According to the celebrated sports journalist, he criticized the Mahama government over same things and over 5 years, the same problems persist.

He then posted a screenshot of a post he made on May 1, 2015, Workers Day, to attack the then government on hardship in the country.

Saddick Adams then made an emphatic statement that his life is worse under the Akufo-Addo government.

I had always thought Akufo-Addo was a ‘serious radical’ man until I got closer...

Without my gibberish songs every annual festival will be boring in Ghana – Patapaa...

Akufo-Addo Has A High Tolerance For Foolishness, Corruption, And Incompetence – Nana Ama Agyemang...

BREAKING: NPP Gets Captain Smart Taken Off Air For Criticizing Their Incompetence

Ghanaian politician and businessman, Hassan Ayariga believes it would be easier for a white man to become the next President of Ghana in a...

Lady in tears after two Twitter boys “chopped” her, got her...