Home Entertainment The Lowest Grades for my kids was C3 and F7 – Afia...

After being pressurized by Bukom Banku and some Ghanaians, self- acclaimed Queen of comedy Afia Schwarzenegger has finally opened up on the performance of her twin sons, John Irving and James Ian Heerdergen Geiling, in the 2020 West African Senior Secondary Certificate Exams (WASSCE).

Contrary to widespread posts on social media, Schwar has stated that her sons passed the WASSCE 2020 with flying colours indicating that the least one of them got is a C3.

As typical of Afia Schwarzenegger instead of just posting the results, she decided to drag the opposing NDC party into it by claiming that former President Mahama bought a house for a Kenyan lady.

She added that if the NDC didn’t stop dating her, she will post incriminating videos that will jeopardize their party. 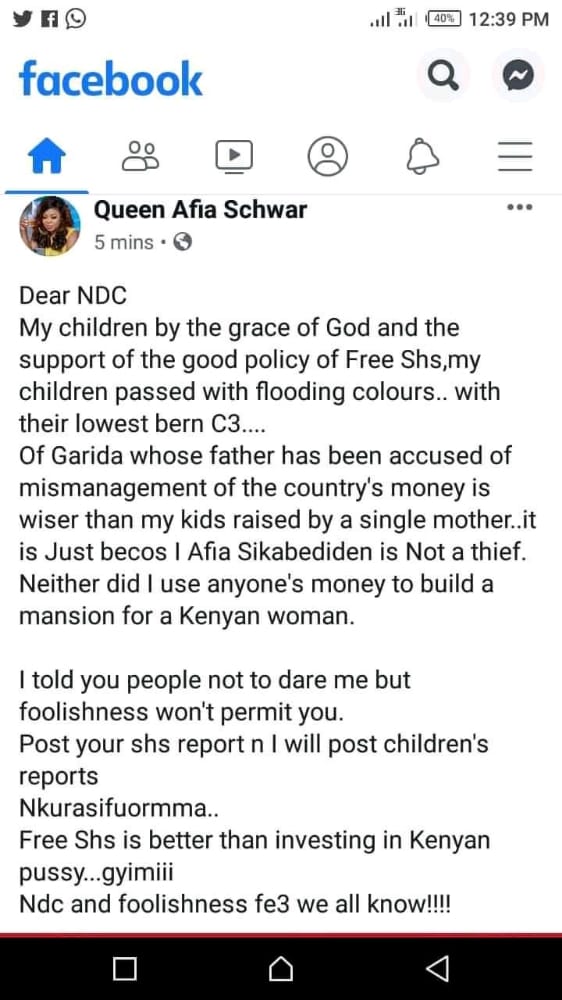 If holy water can heal the sick, the pastor who sold them to you wouldn’t have died young – Ugezu

Tenant impregnates landlord’s wife and daughter at the same time

I’ve not had sex for 15 years till now because men are afraid of...

Christian prayers are useless because, it brings nothing good to the state – Captain...

Ghanaian politician and businessman, Hassan Ayariga believes it would be easier for a white man to become the next President of Ghana in a...